Over the years, cloud products from low Earth orbit (LEO) satellites, such as Terra, Aqua and the NOAA satellites and from geostationary Earth orbit (GEO) satellites, such as GOES, constitute the main global cloud property database. With the launch of DSCOVR, the EPIC instrument provides new opportunities for cloud related studies, since it covers almost the entire sunlit half of the Earth. Consecutive observations during the day make studying the cloud diurnal cycle on a global scale possible. EPIC cloud products also provide a spatial context for the observations from LEO satellites, because for every LEO observation at daytime, there are always closely collocated EPIC observations. The half-globe synoptic snapshot feature of EPIC makes comparison between synoptic GCM model outputs and observations intuitive and helps model validations.

The EPIC Level 2 cloud products include Cloud Mask (CM), Cloud Effective Pressure (CEP), Cloud Effective Height (CEH), and Cloud Optical Thickness (COT). All the products are provided at the EPIC original temporal and special resolutions. CEP and CEH are derived from the oxygen A- and B-bands, respectively. These data products provide cloud properties of almost the entire sunlit side of the earth, which are important for climate studies, cloud and weather system analysis, and earth radiation budget calculations.

A suite of algorithms for generating the operational EPIC CM, CEP/CEH and COT products has been developed.

(1) The EPIC CM is based on the threshold method; surface is classified into three categories: land, deep water and snow/ice; for each surface type, two independent tests are applied and the final CM with confidence level is determined through combining the results from the two tests.

(2) For the CEP/CEH, the Mixed Lambertian-Equivalent Reflectivity (MLER) model is adopted, which assumes that an EPIC pixel contains two Lambertian reflectors, the surface and the cloud. This assumption simplifies the radiative transfer equation and cloud pressure can be retrieved using the oxygen A- and B-band pairs. Since the MLER model does not take into account the effect of photon penetration into clouds, the retrieved cloud pressure is an effective pressure. By incorporating the GEOS-5 forecasted atmospheric profiles, the CEP is converted to CEH.

(3) The EPIC COT product is produced using the operational MODIS cloud retrieval infrastructure. The MODIS system provides simultaneous two-channel retrievals of COT and cloud effective radius (CER), and cloud phase retrievals using a variety of spectral tests. However, since EPIC does not have particle size sensitive channels, a single channel retrieval algorithm was developed assuming fixed values for CER. In addition, cloud phase determination capability for EPIC is limited; hence the EPIC COT product provides two retrievals for each cloudy pixel, one assuming liquid phase and the other ice phase. A likely cloud phase is also provided based on the CEH. An example of EPIC cloud products is given in Fig. A1. We note that the relatively big EPIC pixel size (~10 km at nadir) results in large number of partially cloudy pixels. This effect is taken into account in the CEP retrieval as the MLER model derives the effective cloud fraction first. For COT retrievals, coarser spatial resolution results in a smoother retrieval field compared to the fine resolution MODIS retrievals. 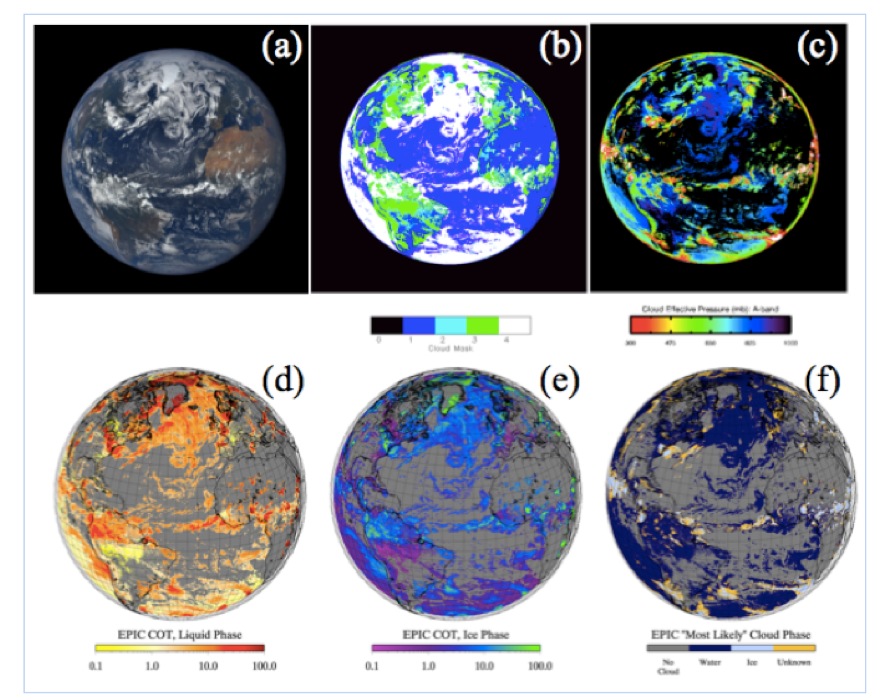