NISTAR is an instrument that measures the outgoing radiation from the Earth. It resides on the DSCOVR spacecraft that is orbiting the Lagrangian L-1 point, which affords a continuous view of the “Earth at noon.” From the L-1 vantage point, NISTAR, along with its companion imaging spectrometer EPIC, have a continuous “big picture” view of the illuminated Earth.

NISTAR employs three electrical substitution radiometers and a photodiode to measure reflected sunlight and infrared emission from the Earth. NISTAR measures the absolute irradiance integrated over the entire sunlit face of Earth in four broadband channels minute-by-minute. These measurements provide an accurate energy balance measurement that improves our understanding of the Earth’s radiation budget. 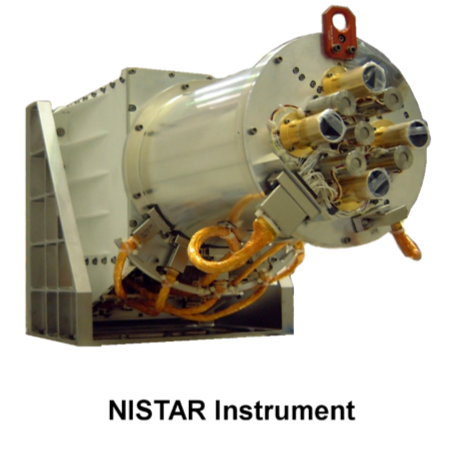 What does NISTAR see?

NISTAR has a one degree field of view that acts as one large pixel that encompasses the entire sunlit side of the Earth. It has a seven degree field of regard and is aligned with the EPIC camera’s boresight to within 0.1 degrees, so both can simultaneously collect data.

The DSCOVR satellite is in a tilted (Lissajous) orbit about the Lagrangian L-1 point. This point is between the Earth and the Sun, approximately 1.6 million kilometers [1 million miles] from Earth and 150 million kilometers [92 million miles] from the Sun. The Lissajous orbit causes the apparent angular size of the Earth to vary from 0.45 to 0.53 degrees over a 6-month period. 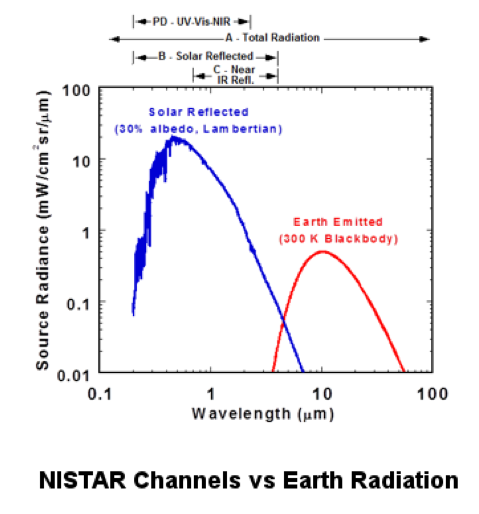 This electrical substitution radiometer channel measures the total radiant power in the UV, visible, and infrared wavelengths emerging from Earth.

This electrical substitution radiometer channel measures the reflected solar radiance in UV, visible, and near infrared wavelengths from Earth.

The primary function of this channel is to track the stability of the filters, and to verify co-alignment of NISTAR and EPIC.

How does an electrical substitution radiometer work?

The Solar Reflected and Near Infrared Solar Reflected channels use filters to allow only radiation at specific wavelengths to reach the radiometer cavity. Two filters are employed. One filter selects the band while the other filter blocks infrared emissions from the first filter, which is heated by the radiation it absorbs. 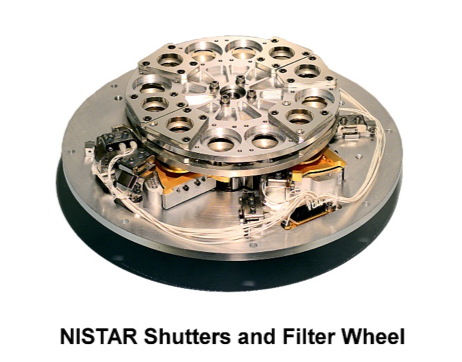 This instrument uses precision diamond-turned 8 mm apertures. These define how much radiation reaches the radiometer cavity and permit Earth irradiance measurements to be obtained.

This is the location where the radiation from the Earth is absorbed. It is a spectrally black cavity that is shaped to maximize absorption by redirecting any reflected light further into its cone where it can be absorbed. The radiometer’s temporal resolution is largely determined by the cavity’s thermal mass.

What is NISTAR’s science goal?

NISTAR’s science goal is to provide measurements of the total outgoing radiation from the Earth in the wavelength range of 0.2 μm to 100 μm with an accuracy of 1.5 % or better. With these measurements we can improve our understanding of the energy entering, reflected, absorbed, and emitted by the Earth.

The daily rotation of the Earth and varying amounts of clouds result in large variations of solar reflected radiation levels. The ability to measure the entire sunlit side of the Earth at once is the reason that NISTAR is at L-1. Similar types of instruments in low Earth orbit only see a small portion of Earth at once, requiring complex post-processing and numerical models to extrapolate what NISTAR measures directly. 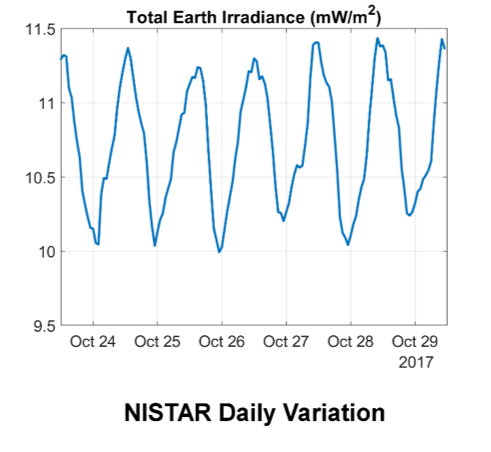 The Earth’s axis is tilted by approximately 23 degrees from its orbital plane. This not only causes the seasons we experience, but changes what part of the Earth NISTAR sees throughout the year. Around the December solstice the view from L-1 is dominated by oceans: Southern, Indian, South Pacific, and South Atlantic. These large bodies of water absorb more solar energy, lowering the Earth’s total irradiance. Around the June solstice the view from L-1 is dominated by large continents: Asia, Europe, North America, and Africa. These land masses reflect more solar energy, increasing the Earth’s total irradiance. 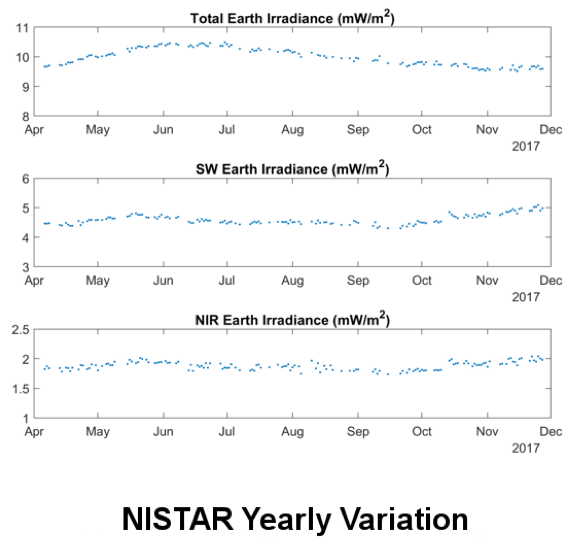 What are some of the challenges?

Assessing long-term trends of what is happening with the Earth requires an instrument that is highly stable. This is one of the reasons why an electrical substitution radiometer was chosen, since it is inherently stable. It also requires continued data processing, analysis, and troubleshooting efforts.

Because the DSCOVR spacecraft is not stationary at the L-1 point, but instead orbits the L-1 point, what NISTAR sees varies slightly. The distance from the Earth changes, causing the apparent angular size of the Earth to vary from 0.45 to 0.53 degrees. This causes the amount of radiant energy that NISTAR receives to vary slightly—a factor that must be accounted for during data processing. The orbit also causes which part of the Earth NISTAR views to change slightly. This effect must be accounted for when comparing NISTAR’s data to that of other programs such as CERES.

NISTAR is extremely sensitive to its thermal environment because it is measuring nanowatts of radiative power from the Earth one million miles away. Subtle thermal changes in the instrument and spacecraft must be accounted for. For instance, thermal effects from spacecraft maneuvers can be detected for the next several days. Monthly dark-space calibrations, where the instrument looks away from the Earth, are performed to account for long-term changes in the thermal environment.